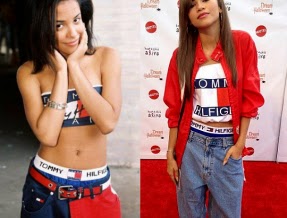 Hate it or love it, Disney star Zendaya Colman is set to play the role of late singer Aaliyah in biopic film. Vh1 has decided it was time to make a biopic film of the legendary singer and felt after casting the singer/ex-Disney Zendaya was perfect for the role. You may remember her for her biggest hit "Replay".

According to our sources, the biopic is set to debut on VH1 later this year. Back in September, Aaliyah’s uncle Barry Hankerson let the cat out of the bag that a biopic was in the works, and soon after, whispers of a casting call made it’s way online. BET host Keisha Chante, who has been lobbying for the role for years, even alluded to her Facebook fans that she tried out for the part, but it was Zendaya who ended up coming out on top. We are told the official announcement will be made this week and filming will begin in the next few weeks.
***CHECK HOW ZENDAYA PAYS TRIBUTE BELOW***