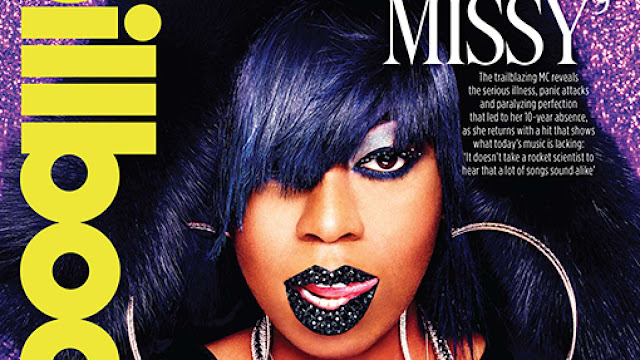 Missy is BAAACCCCKKKKK! Better than ever she is heating up the streets again! The latest in Missy News: It can’t be stressed enough how much Missy Elliott has changed the game: visually, sonically and with overall originality. Which is why Billboard magazine is giving the iconic artist dual artist as the cover feature on their latest issue and as the first-ever recipient of the brand’s first ever “Innovator” award at this year’s Women in Music event, which will be televised on Lifetime on December 18.

Peep some of the topical highlights from the interview with Jonathan Ringen.

PANIC ATTACKS BEFORE THE SUPER BOWL

Katy Perry’s team floated the idea of having her come out during the Super Bowl halftime show — what the MC assumed would be a quick cameo. Then Perry got on the phone. “She said, ‘I want you to do three of your records,’ ” recalls Elliott. “And I’m just like, ‘Did she say three?’
After rumors of the surprise began to circulate online, Elliott’s anxiety mounted. The night before the game, it metastasized into a full-blown panic attack: “Like, IVs in my arm, everything,” she says. “Nobody knew.” The day of the show, she remembers being just offstage and hearing the opening riff of “Get Ur Freak On.” “I said, ‘If I can get over this step, then I know all my dance steps will be on point,’ ” she recalls. “I know it was nothing but the grace of God that lifted me up and took me through that performance.” (Says Sharaya: “Me and Missy are really spiritual people. We wait on God to show us the way.”) Elliott sold nearly 350,000 song downloads by the end of the following week alone.

From Elliott’s perspective, at least, she didn’t simply disappear after 2005, when she released her most recent album, The Cookbook, and scored her last hit, “Lose Control.” (The track went to No. 3 on the Billboard Hot 100 and helped spark the EDM boom by sampling Cybotron’s early techno classic, “Clear.”) She never stopped working, writing and producing songs for artists including Fantasia, Monica and Keyshia Cole — all of whom she helped reach the top five on the Hot R&B/Hip-Hop Songs chart — and recording a vast amount of her own material. “If I wanted to do The Missing Files of Missy Elliott, I have probably six albums just sitting there,” she says. She’s the first to admit that she didn’t think the break was going to be this long. “But it was much needed,” she says. “People hadn’t realized that I haven’t just been an artist, I’ve been a writer and a producer for other artists. When you’re writing that much, your brain is like a computer. You have refresh it.”

Today, Elliott owns six houses (“two in Virginia, two in Miami, one in New Jersey and one in Atlanta”) and a world-class collection of exotic cars (including a Ferrari her mom drives to church, very slowly). But she still keeps her circle small. The list of people she trusts about music is especially short, extending not far beyond Timbaland, Williams, Sharaya and her cousin Ellis. She credits her mother, Pat Elliott, with helping her avoid some of the pitfalls too many of her peers have fallen into. “My mama don’t play,” says Elliott. “When it’s time for taxes to come around, she’s like, ‘Yo, taxes are due. I’m on my way to send your money off.’ ” (Elliott wasn’t always good with her finances: “When I first started in the business, I spent so much! Staying in a Trump Hotel for two years, spending eight Gs a month just living.”) She sees her Jersey home, which is “in the mountains,” as a sanctuary. “I can come to the city and hear the horns and all the traffic back and forth,” she says. “But when I leave there, I can go [to New Jersey] and relax my mind.” There is one less-than-restful element to the place, though. “Unfortunately,” she adds, “there are mad bears out there.”

Read the full article over at Billboard, which arrives on newsstands on November 28.
Posted by igrind4real at 8:59 AM