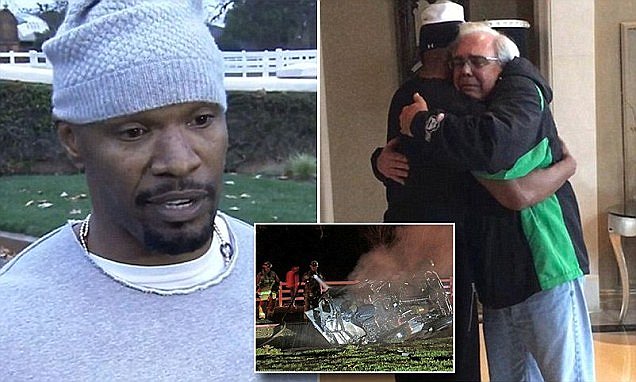 Jamie Foxx can add “good samaritan bordering on superhero” to his resume. The actor and comedian saved a man from a fiery car wreck in Los Angeles and detailed how it all went down.


Foxx spoke to KABC outside his Hidden Hills home Tuesday about the incident. Foxx says he used a pair of EMT scissors to cut the driver’s seatbelt and hoisted him out of the truck and to safety.
The man’s dad was on scene too to thank the actor and got emotional for obvious reasons.
The coolest part? … How calm Foxx was when talking about the rescue, dude’s got ice in his veins.

Foxx said he heard the crash, called 911 and then he rushed down to the scene. The truck was already on its side and on fire. The door was locked, and the window was up.
With help from another man, Foxx pulled Kyle out of the burning wreckage. The two broke the car window using EMT scissors, cut the seat belt and pulled Kyle out to safety.


Foxx noted that seconds after getting the man, identified as Brett Kyle, out of the car, it went up in flames. Watch Foxx detail the story below. Salute!
Posted by igrind4real at 10:13 PM