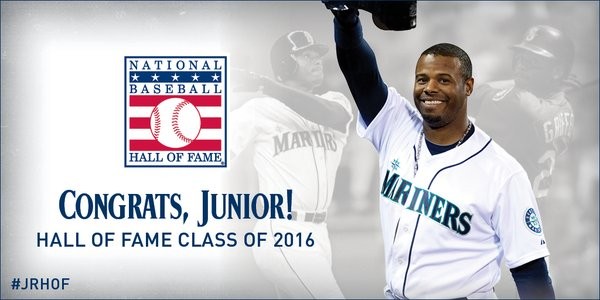 Ken Griffey Jr. will be inducted into the baseball Hall of Fame along with Mike Piazza, it was announced Wednesday (Jan. 6). The news is extra sweet for 46-year-old Griffey who earned a record-breaking 99 percent of the votes out of more than 400 ballots.


A star slugger of the Steroids Era never tainted by accusations of drug use, Griffey was on 437 of 440 votes in his first appearance on the Baseball Writers’ Association of America ballot. His 99.3 percentage topped the previous mark of 98.84, set when Tom Seaver appeared on 425 of 430 ballots in 1992.
There had been speculation Griffey could become the first unanimous selection.
“I can’t be upset. It’s just an honor to be elected and to have the highest percentage is definitely a shock,” Griffey said on a conference call.
After falling 28 shy last year, Piazza received 365 votes in his fourth time on the ballot and will be inducted along with Griffey on July 24.
“Incredibly special. Wow,” Piazza said on a call with MLB Network.
“I sat here with my mouth on the floor,” he said.
A player needs 75 percent to gain election, and Jeff Bagwell missed by 15 votes and Tim Raines by 23. Trevor Hoffman, on the ballot for the first time, was 34 short.
The vote total dropped by 109 from last year because writers who have not been active for 10 years lost their votes under new rules.

Griffey played professional baseball for just over two decades, spending the majority of his time with the Seattle Mariners. The Hall of Fame induction ceremony is scheduled for July 24 in Cooperstown, New York.
Posted by igrind4real at 9:02 AM