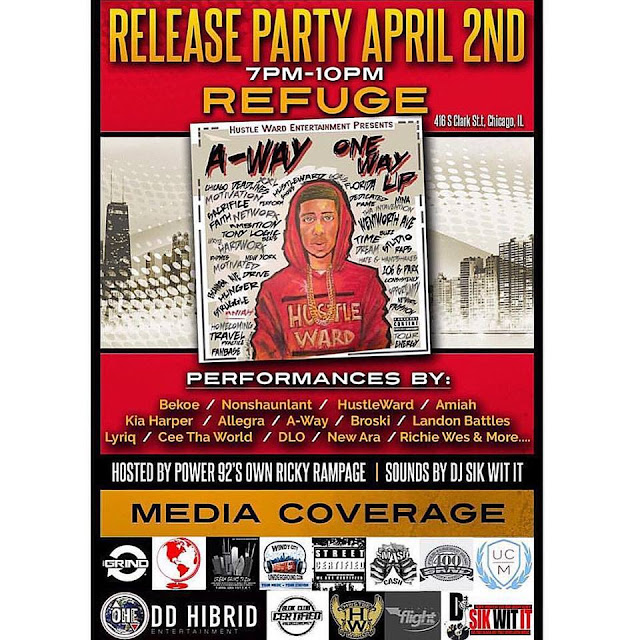 Not to many artist can make an EP release party seem like a full out stadium concert. Well that is just what rapper A-Way did at his One Way Up EP release party (Saturday 4/2/16), at Refuge Live in Chicago.
The night included great performances by Richie Wes, Kia Harper, Bekoe of Illinoiz, Allegra, Lyriq aka Alexander Blane, Nonshaunlant, Amiah  and of course A-Way plus the Hustle Ward Crew. The event was hosted by funny man Ricky Rampage of Power 92.3fm. Blok Club's own Dj Sik Wit It provided the tunes that kept the crowd lit!
The B.E.T. performer was able to coordinate night full of entertainment and closed out the show with his exclusive performances of songs off #OneWayUp EP project.
Media outlets/co-sponsors such as Urban Color Magazine, Windy City Underground Radio, Oddhibrid, Illinoiz, Hustle Ward, iGrind4Real.com and more were all in the building to celebrate and document the moments! Special thanks to A-Way and the whole Hustle Ward family for inviting us and showing us mad love at the release party. There was nothing but heads nodding, people dancing and picture taking at the event.
Follow @A_WayOfficial on twitter and instagram to keep up with his up coming event and music releases.
The #OneWayUp EP w/ EXCLUSIVE documentary on A-Way is now available!

⬇️Download Here⬇️
http://m.audiomack.com/album/a-wayofficial/one-way-up
Check out some pictures we captured below of the event!